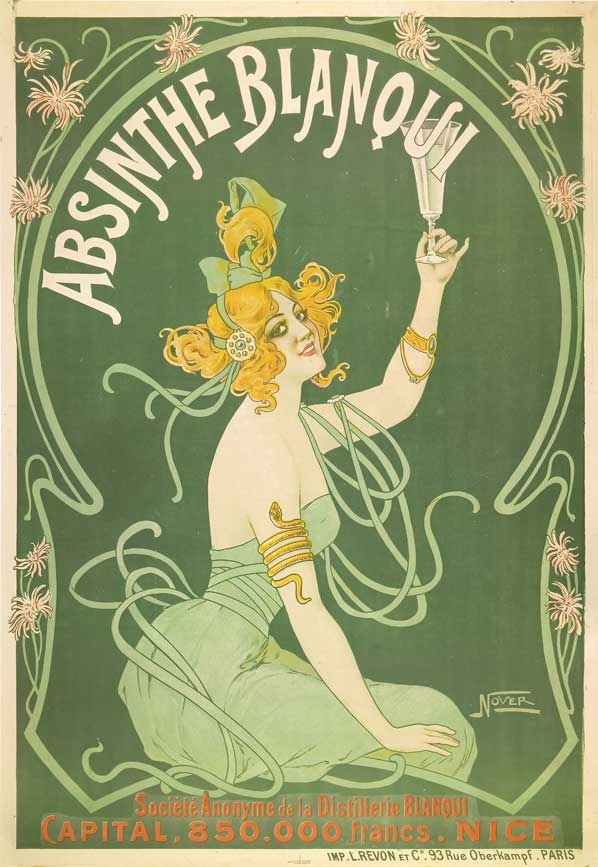 Has there ever been a more controversial drink than Absinthe? Elixir of Life, turned green demon, turned exotic and unobtainable liqueur. Then finally landing as an insignificant yet infamous spirit. While I’m sure most people still haven’t had much experience with Absinthe. And, might never want to be given its medicinal like flavors of anise and herbs, it truly has a deliciously dramatic history.

While popularized in France, Absinthe was originally created in Couvet, Switzerland by French Doctor, Pierre Ordinaire. His creation was anything but ordinary. His concoction was a mixture of fermented herbs that included Artemisia Absinthium or Wormwood. Wormwood was first used to help prevent malaria, which was ravaging French soldiers in Algeria during the 1800s. The taste for the green elixir became a favorite of the soldiers who would ask for it at bars back home throughout the 1940’s. What we now know, and will discuss later, is that the soldiers were more than likely suffering from alcoholism.

The recipe was sold to the Pernod Family, yes that Pernod Family that own favorites such as Absolute Vodka and Chivas Regal Scotch, of which Henri-Louis Pernod opened a factory in Pontarlier, France to manufacture Absinthe on a large scale. At this point, soldiers may have lead the way for Absinthe being accepted as more than medicine. However, it truly took off between the 1860’s and 1870’s when Phylloxera (a parasite) devastated vineyards all over France causing a wine shortage and changing the drink of choice amongst the well off from wine to Absinthe. It didn’t become known as “La Fée Verte” or “The Green Fairy”, till it became popular amongst the bohemians and it was romanticized by artists, poets, and writers who called absinthe their muse.

Not too long after its rise in popularity, movements against absinthe broke out and it became the center of blame for tragedies committed while intoxicated. The most famous case was that of Jean Lanfray in Switzerland. Lanfray was arrested after shooting his pregnant wife and two children after an intoxicated argument with his wife. He and his legal counsel vehemently argued that it was the Absinthe that temporarily drove him mad. At this point, those pushing the concept of Absinthism (the habitual use of Absinthe that leads to mental unstableness), used the case to insist on the banning of Absinthe. Of course, they completely ignored all the other alcohol Lanfray had consumed on top of the mere two shots of watered down Absinthe.

Tragedies like this fueled the false science being done by psychologists and chemists, trying to prove that it wasn’t alcohol but wormwood that was the cause. This would exclusively link the tragedies to Absinthe aiding in the eventual ban of the drink globally during the early 1900’s. Absinthe was banned for almost a century in most countries until it became vogue in the early 2000’s because of its exoticness being only available in places like the UK where it was never banned (because it was never that popular in the UK to begin with). Slowly, under many restrictions, Absinthe has been legalized again.

The main restriction is the level of Thujone allowed. Thujone is the byproduct of fermenting wormwood and the chemical compound blamed for causing Absinthism. Despite modern science proving that Thujone is not hallucinogenic at all, it is still practically impossible to find “real” absinthe or absinthe made with the original recipe (unless you are in the UK). If you live in the United States, absinthe can only be sold if it is strictly Thujone free.

In the end, the main cause of absinthe’s effects were the extremely high levels of alcohol, sometimes 70% or more ABV, that made it a favorite amongst those suffering from alcohol dependency (think back to soldiers who were being regularly fed absinth as a medicinal elixir and craving it once they were home). This is why the next restriction is ABV levels. If you live in California Absinthe is restricted by ABC Laws enforcing that a producer cannot sell anything over 120 proof (60% ABV).

When you think about it, the history of absinthe has all the makings of a great drama series. There’s adventure, love, music, poetry, murder, and resurrection! We could call it The Real Housewives of Wormwood.

P.S. One should always drink responsibly. Within one’s personal limits and NEVER when driving.

#happysunday my friends! This past week has been a brutal battle with my conscience over whether to take the risk and accept a job offer or play it safe and stay where I am. My 2 biggest concerns are rent where I would have to move and if I’m ok with not having the money to travel for a few years possibly more. Naturally I avoided making a decision just yet to make a new cocktail for everyone! #procrastination 😅 I call this Honey is Thyme! Muddled cucumber, lemon thyme, lime juice, and honey give this a subtle nuance of freshness. While gin (I used @suntory_rokugin ), @stgermaindrinks elderflower liqueur, and pear brand add complexity and strength. You can find the recipe on my website! The link is in my bio. Enjoy and share with me pictures of your Thyme is Honey moments! #theunpretentiouswineenthusiast #cocktails #summerdrinks #summervibes #caloforniadreaming #mixology #thehomebartender
This past weekend was crazy hot for California! #thankful I didn’t hear about a massive fire over the weekend 🙏 BBQ and beer is often the go to for hot weather food but sometimes even the idea of standing in front of a BBQ makes you want to melt🥵
Happy Father’s Day to the daddies and soon to be daddies out there today! I hope everyone had fun celebrating! This weekend I did a little research into some ready made cocktail mix options! More specifically some “light” cocktail mixes because so often they are just TOO SWEET for me! And let’s face it sometimes you just want something quick and easy, and done in seconds without having to think about it or clean up after it! This weekend was a taste of @williamssonoma Skinny Yuzu and Meyer Lemon mix! I did treat myself to some #noletsgin and did a quick mix of 1 part gin to 2 parts mix shaken with ice and topped off with a sample of @ourhousewine sparkling rose for some fizziness. This made two cocktails, were about 100 calories per cocktail, and were pretty close to feeling like a bartender made this for you! I rimmed the glass with #casamigos chili salt for some vavavoom and the only comment I have is to maybe squeeze a little extra lemon if you like a slightly more tart flavor like I do! I liked that @williamssonoma didn’t use a sugar substitute like most light drinks, but instead just used a very light amount of organic cane sugar and fruit juices to lightly sweeten it. $16.99 in California and can make potentially 10-20 drinks depending on how much mix you use. Seal of approval ✅ Next weekends flavor is the Blueberry Pomegranate! #theunpretentiouswineenthusiast #fastmixology #halfhomemade #cocktailhour #happyhour #lightdrinks #cocktailminusthecalories #weekendtastings
Happy Saturday my friends! Saturdays are for experiments! Filberts (hazelnuts) I learned are very big in the Pacific Northwest, and my trip to Seattle inspired me to try to pair them with wine!
Happy Sunday my friends! Does anyone else wish they were on a tropical Caribbean island right now and not mentally preparing themselves for work on Monday? Well this elixir is your medicine for those anticipate #mondayblues feels! “Jamaican Me Thirsty” is inspired by one of my favorite cuisines Jamaican Jerk 🤤 It’s got rum! It’s got spice! It’s got heat! It’s got acidity! And it’s got just a touch of sweet and creamy to make you feel like you are on your exotic island escape! If you’re looking for those vacation feels head to my website for the recipe. Link is in my bio. #theunpretentiouswineenthusiast #vacationvibes #mondaymotivation #caribbeanlife #inmydreams #rum #mixology #cocktailhour #happyhour #drinkswithfriends
Do you live alone and have an unfinished bottle of wine going to waste? Or maybe you have some leftovers from a gathering you aren’t planning on drinking? Don’t throw it down the drain! Wine makes an amazing braising and poaching liquid! Plus, you can’t ever go wrong with a white wine sauce 😉 My most recent find I’m loving is curtesy of @foodandwine magazine! They have a recipe for white wine pouched salmon with lemon, leeks, and tomatoes that is 🤤 I made a few personal tweeks such as adding some crushed garlic, a pinch of pepper flakes, and specifically using French cultured butter because OMG it’s f**king amazing! Waist not want not is key to sustainable happiness and it can be an oh so delicious mantra to live by! The link to the recipe is below if you too have some white wine you don’t want to waste!